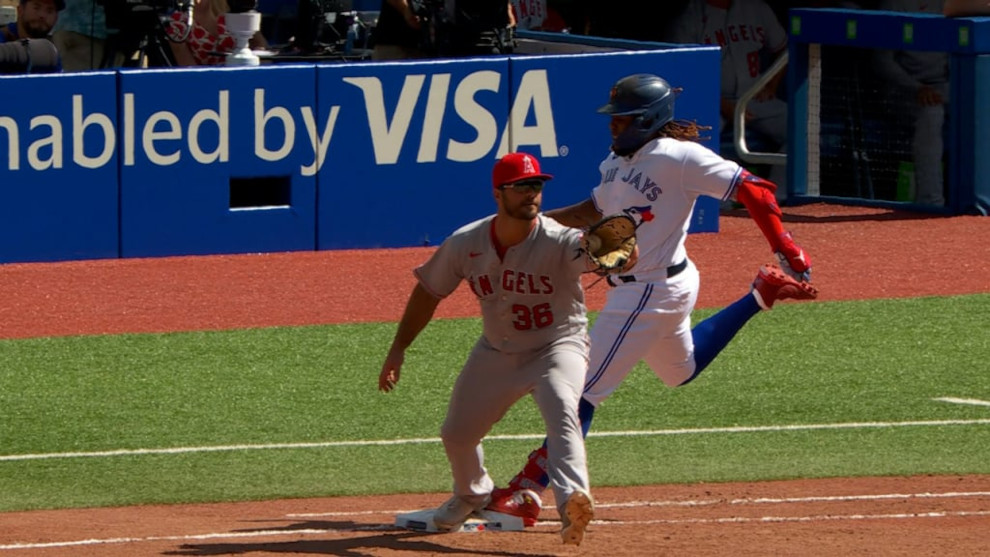 PHILADELPHIA — Ross Stripling had made life relatively easy on Toronto’s offense since returning from the injured list on Aug. 17 by regularly stifling the opposition to the tune of a 2.45 ERA in six starts.

So when Stripling’s teammates had to pick him up on a rare off night Tuesday at Citizens Bank Park, they were more than happy to oblige — in a huge way.

Jackie Bradley Jr.’s 4th homer
Sep 21, 2022 · 0:35
Jackie Bradley Jr.’s 4th homer
The Blue Jays scored in eight of the nine innings en route to a wild 18-11 win over the Phillies. The 18 runs were Toronto’s second most this season, trailing only the 28-run outburst on July 22 at Fenway Park. As for the win, it moved the Blue Jays two games ahead of the Rays for the top AL Wild Card spot. The Mariners own the third spot at 2 1/2 games back.

Though Stripling was staked to a 3-0 lead before throwing a pitch against the Phils — and a 6-0 lead through three innings — he took a no-decision after giving up five runs over four-plus innings.

“When you get seven runs — I got seven of the 18 — you want to be able to get deep into the game, secure a win, save some arms,” said Stripling, who allowed season highs in runs and hits (nine). “I wasn’t able to do that, so disappointed in that, for sure.”

Every Blue Jays starter collected at least one hit, marking the eighth time they’ve accomplished that feat this season. That’s tied with the Mets for the most such games in the Majors. Overall, 11 Toronto players had a hit on Tuesday night, the club’s most in a game since June 10, 2012 (12 hitters vs. the Braves).

“I felt really good today; it was a different day,” Hernández said. “At the plate, I’m just trying to get good pitches to hit, trying to be a little bit more aggressive with pitches around the zone and just trying to put it in play and see what happens.”

Get the latest from the Toronto Blue Jays
Have the latest news, ticket information, and more from the Blue Jays and MLB delivered right to your inbox.

It was also a good sign for the Blue Jays to get some contributions from a pair of banged-up stars in George Springer and Alejandro Kirk. Springer went 2-for-5 with a walk and an RBI, easing any potential concerns stemming from being hit by a pitch in the left elbow on Sunday. Kirk, meanwhile, went 3-for-5 with a pair of RBIs after missing the past five games due to left hip soreness.

Jackie Bradley Jr. added his first homer as a Blue Jay, a three-run shot in the ninth. Danny Jansen went 3-for-6 with two RBIs, and Raimel Tapia had an RBI triple in the seventh and a two-run RBI double in the eighth.

“When we get that type of production from the bottom of our lineup, too — like Tapia, Jano, Jackie coming in and hitting a homer — we’re going to be tough to beat,” Stripling said. “It wasn’t a good day to be a pitcher on either team, that’s for sure.”

Raimel Tapia’s RBI triple
Sep 21, 2022 · 0:54
Raimel Tapia’s RBI triple
By the time Stripling exited the game in the bottom of the fifth, the Phillies had cut the Blue Jays’ lead to 7-4. Toronto extended it back to 14-5 by scoring one run in the sixth, two in the seventh and four in the eighth — but the Phillies plated five in the bottom of the eighth to again close the gap. Four more runs in the top of the ninth ended Philadelphia’s comeback effort for good.

“It’s really fun,” Hernández said of the offensive eruption. “But it’d be especially [fun] if we were the only ones hitting. They had some really good swings today, they were battling and they kept the game close.”

Danny Jansen’s RBI double
Sep 21, 2022 · 0:46
Danny Jansen’s RBI double
It was certainly closer than the Blue Jays would have liked given the way the night started, but starting a pivotal road trip with a victory is never a bad thing. In doing so, Toronto also avoided losing back-to-back games for the first time since being swept in Anaheim from Aug. 26-28.

“At this point, every win counts,” interim manager John Schneider said. “So we’ll take it.”